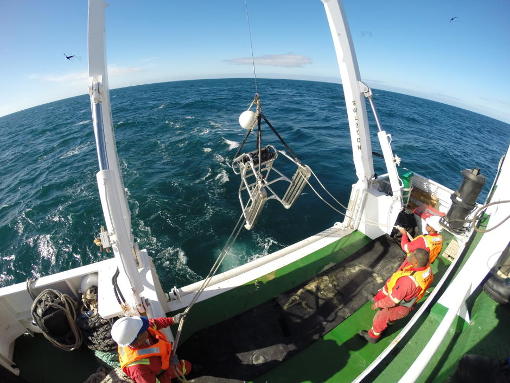 30 May SkiMonkey Flies Again To Collect Visuals From The Deep

Descending into the darkness. It is pitch black beyond the camera lights and nobody knows what may suddenly appear on the screen before us. The excitement and anticipation is tangible in the tiny operations room aboard the R/V Ellen Khuzwayo (Department of Agriculture Forestry and Fisheries research vessel) where researchers from SAEON (Dr Charles von der Meden) and the University of Cape Town (A/Prof. Colin Attwood, Karen Tunley and Stuart Norman) are huddled, staring at a screen. A flash of silver fish appears on the screen and then vanishes again. Colin leaps out his seat and shouts “Did you get that one Charles?”… but alas, it darted past too fast and escaped being captured by the click of the camera. Everyone settles down, staring at the screen again….. and this is how the days passed from 2nd to 9th February 2014 onboard the R/V Ellen Khuzwayo when the first South African trawl closure benthic experiment finally got underway.

The impacts of demersal trawling have been cited as one of the largest global anthropogenic sources of disturbance to the seabed and its biota (Jennings and Kaiser 1998). Several international initiatives are striving towards gaining a better understanding of these ecosystem impacts, specifically in different habitats subjected to different types of fishing pressure. Although the demersal trawl fishery in South Africa is considered to be well managed, very little is known about the effects of trawling on the biodiversity of deepwater habitats and biota and this remains a high research priority. As part of their commitment to retaining Marine Stewardship Certification (MSC) for the South African hake fishery, the South African Deep-Sea Trawl Industry Association (SADSTIA) are collaborating with SAEON, UCT and SANBI researchers in an experiment that  aims to assess potential recovery of the seabed after nearly 100 years of trawling.

The trawl industry have agreed to stop trawl fishing in portions of an area offshore on the West coast of South Africa whilst continuing trawling in demarcated lanes for a period of at least 4 years (Fig. 1). The experimental area lies 108 nm west of Groenriver mouth at depths between 360 and 510 m adjacent to a submarine mound called Childs Bank. After several years of planning, the first baseline survey and samples were collected in February 2014 using SAEON’s deep-sea SkiMonkey III camera system and benthic grabs deployed from the DAFF research vessel Ellen Khuzwayo. Using the SkiMonkey III, researchers successfully captured 3 hours of video footage and 1928 still images of the seabed at 15 stations in the experimental area. The footage and stills will be analysed for epifaunal community composition and abundance. Benthic grab samples collected at the same 15 stations will be analysed for infauna and sediment properties. It is anticipated that over time (at least 4 years), the benthic fauna (both epifauna and infauna) are likely to change in the lanes that will no longer be subjected to the disturbance of trawl fishing. Annual sampling in areas closed and open to trawling will allow any changes in colonising communities to be detected.